As 4th generation ranchers and farmers, hunting coyotes is not just a hobby or a pastime for O'Neill Ops. They have a duty to protect the cattle that they raise for food. For them, predator hunting is not merely a sport, but a way of life.

Coyotes are presently the most abundant livestock predators in western North America, causing the majority of sheep, goat, and cattle losses. For example, according to the National Agricultural Statistics Service, coyotes were responsible for 60.5% of the 224,000 sheep deaths attributed to predation in 2004.The total number of sheep deaths in 2004 comprised 2.22% of the total sheep and lamb population in the United States, which, according to the National Agricultural Statistics Service USDA report, totaled 4.66 million and 7.80 million heads respectively as of July 1, 2005. Because coyote populations are typically many times greater and more widely distributed than those of wolves, coyotes cause more overall predation losses. The United States government agents routinely shoot, poison, trap, and kill about 90,000 coyotes each year to protect livestock.

Coyotes typically bite the throat just behind the jaw and below the ear when attacking adult sheep or goats, with death commonly resulting from suffocation. Blood loss is usually a secondary cause of death. Calves and heavily fleeced sheep are killed by attacking the flanks or hindquarters, causing shock and blood loss. When attacking smaller prey, such as young lambs, the kill is made by biting the skull and spinal regions, causing massive tissue and bone damage. Small or young prey may be completely carried off, leaving only blood as evidence of a kill.

In the absence of the harassment of coyotes practiced by rural people, urban coyotes are losing their fear of humans, which is further worsened by people intentionally or unintentionally feeding coyotes. In such situations, some coyotes have begun to act aggressively toward humans, chasing joggers and bicyclists, confronting people walking their dogs, and stalking small children. Non-rabid coyotes in these areas sometimes target small children, mostly under the age of 10, though some adults have been bitten.

SUBSCRIBE for the latest NV and Thermal Videos:
https://www.youtube.com/subscription_center?add_user=thermaloutfitters

Ultimate Night Vision is an industry leader in thermal imaging, image intensification, and digital night vision devices. Part of what distinguishes UNV from other online retailers is the vast amount of knowledge and experience we have gained from regularly using and testing night vision, thermal, and digital NV equipment in the field.

UNV carries and sells a wide variety of NV and thermal optics from all major manufacturers and our primary goal is to provide unbiased objective information to assist customers in the decision-making process. 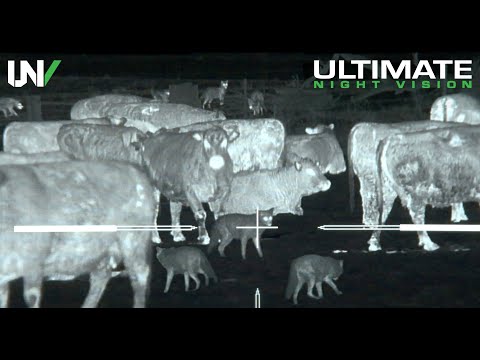