Compilation of the best videos night hunting with the Trijicon REAP-IR Thermal scope including 48 hogs down, 6 coyotes, and 2 bobcats. The REAP-IR is a 640x480 12 micron thermal scope with amazing image quality.

Each year feral hogs cause millions of dollars in damage in the form of damaged crops, contaminated water supplies, broken equipment, transmission of disease and injury to livestock.

Due to their intelligence, adaptability, and prolific breeding habits, traditional methods of hunting and trapping have been largely ineffective in reducing the feral hog population. Since feral hogs are not considered game animals in Texas they may be hunted by any means or methods at any time of year. Some of these methods include large round traps with remote trigger capability, hunting with dogs, and helicopter hog hunts.

Recently, with the increased availability and affordability of night vision and thermal optics, farmers, hunters and citizens alike have access to new weapons/tools to aid in the fight against feral hogs.

Coyotes are presently the most abundant livestock predators in western North America, causing the majority of sheep, goat, and cattle losses. For example, according to the National Agricultural Statistics Service, coyotes were responsible for 60.5% of the 224,000 sheep deaths attributed to predation in 2004.The total number of sheep deaths in 2004 comprised 2.22% of the total sheep and lamb population in the United States, which, according to the National Agricultural Statistics Service USDA report, totaled 4.66 million and 7.80 million heads respectively as of July 1, 2005. Because coyote populations are typically many times greater and more widely distributed than those of wolves, coyotes cause more overall predation losses. The United States government agents routinely shoot, poison, trap, and kill about 90,000 coyotes each year to protect livestock.

Coyotes typically bite the throat just behind the jaw and below the ear when attacking adult sheep or goats, with death commonly resulting from suffocation. Blood loss is usually a secondary cause of death. Calves and heavily fleeced sheep are killed by attacking the flanks or hindquarters, causing shock and blood loss. When attacking smaller prey, such as young lambs, the kill is made by biting the skull and spinal regions, causing massive tissue and bone damage. Small or young prey may be completely carried off, leaving only blood as evidence of a kill.

In the absence of the harassment of coyotes practiced by rural people, urban coyotes are losing their fear of humans, which is further worsened by people intentionally or unintentionally feeding coyotes. In such situations, some coyotes have begun to act aggressively toward humans, chasing joggers and bicyclists, confronting people walking their dogs, and stalking small children. Non-rabid coyotes in these areas sometimes target small children, mostly under the age of 10, though some adults have been bitten.

Our Most Popular Videos: https://goo.gl/uJk0dN

Ultimate Night Vision is an industry leader in night vision, thermal imaging and digital NV devices. Night vision is not just a profession for us, it is our passion. Here in Texas, we are fortunate enough to be able to use NV and thermal scopes for hog hunting, coyote hunting, and hunting other predators and varmints at night. The firsthand knowledge gained through hunting with NVD's on a regular basis allows us to provide accurate and relevant information to our customers.

We carry a wide variety of optics from all major manufacturers including Trijicon, Pulsar, Flir, Armasight, L3, Harris and more. We strive to provide unbiased information to aid customers in the decision-making process. We also have a nationwide rental program which gives customers the unique opportunity to test and compare various devices under real-world conditions before committing to a large purchase. 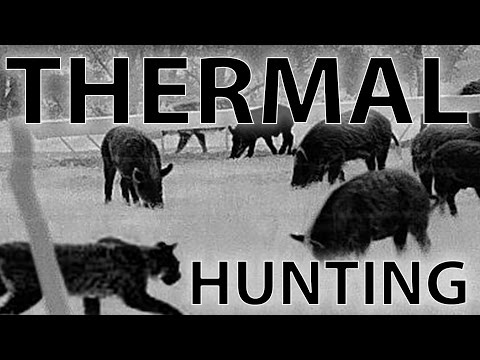 Compilation of the best videos night hunting with the Trijicon REAP-IR Thermal scope including 48 hogs down, 6 coyotes, and 2 bobcats. The REAP-IR is ...