135
Heavy rains and thunderstorms in Spain in the Balearic Islands and parts of the northeast and east of the mainland have caused flooding. The heaviest rains fell in parts of the eastern part of the Autonomous Community of Catalonia and the Balearic Islands, where the total rainfall was about 8-11 cm. Thunderstorms broke out in parts of southern Aragon, eastern Catalonia and in all but the extreme northern and extreme southern autonomous communities Valencia and the Balearic Islands. Thunderstorms can be accompanied by strong gusts of wind, lightning and
hail.
The following weather warnings have been issued by the Spanish State Meteorological Agency for the affected areas.
Officials may update and possibly expand the coverage of weather warnings in the coming days.
Continued heavy rains caused flooding in low-lying communities near rivers, streams, and streams. Urban flooding is also possible in developed areas with easily flooded or non-existent storm sewer systems. Areas downstream of major reservoirs or rivers experienced flash floods after relatively short periods of intense rainfall. Landslides have been observed in hilly or mountainous areas, especially where heavy rains have soaked the soil. Power outages and telecommunications were disrupted where a major flood or landslide impacted utilities.
Floods and mudflows rendered some bridges, rail networks and roads impassable, making land travel difficult in and around affected areas. Congestion on the road surface has led to dangerous driving conditions on regional highways. The authorities temporarily closed some low-lying routes that were flooded by flood waters. Unfavorable weather conditions can also lead to delays and cancellations of flights at regional airports. Flooding could block regional rail lines. Delays and cancellations of freight and passenger trains occurred in areas with heavy rainfall and potential track flooding.

Localized disruptions may also occur in lowlands, some businesses may not operate at full capacity due to flood damage to facilities and the inability of some employees to reach their jobs. 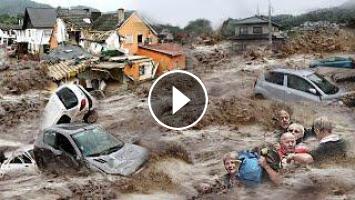 Heavy rains and thunderstorms in Spain in the Balearic Islands and parts of the northeast and east of the mainland have caused flooding. The heaviest ...