Overview of weather events and natural phenomena around the world.
Flash flood after heavy rains in the Plovdiv region, Bulgaria.
Glacier collapse due to melting in Queulat National Park in southern Chile.
Flooding in Nepal caused river levels to rise and soil to erode along the banks. As a result, the houses were hanging over the abyss.
A fireball in the night sky over Indonesia was observed by local residents.
Flooding overwhelms the bed of a dry river in Biskra district, Algeria.
A powerful dust storm hit another state in northern Africa, Morocco.
Heavy hail in the heat of 40 ° C (104 ° F) fell in the UAE, in the emirate of Dubai.
A severe rain storm flooded the streets of New York City in the Bronx and Queens.
Heavy rains have caused the Muleje River to flood in Baja California Sur, Mexico.

ATTENTION: All videos are taken from open sources. The selection is carried out by date of publication, title, description and location of the event. Sometimes, due to unfair posting of news on social networks, the video may contain frames that do not correspond to the date and place. It is not always possible to view all videos. We apologize for any possible mistakes! 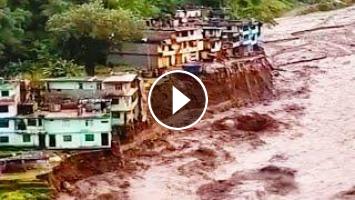