France: Incredible footage from Brignoles in Vars, where a hailstorm raged

The most serious blow was dealt to the department of Charente-Maritime. 3 tornadoes caused the most severe damage. Fortunately, there were no casualties. Last night, another devilish funnel was recorded in the same area. But she passed her short life path over fields and copses. Therefore, there was no damage, although some farmers still suffered: several tens of hectares of crops were destroyed or seriously damaged.
Tornadoes recorded in France reached the third category of intensity on the 6-point Fujita scale. Wind gusts in such a vortex reach 70 m/s. Such a tornado is not extreme, but is already capable of serious destruction.
In addition to tornadoes in other regions of the country, severe thunderstorms with squalls, as well as violent downpours, were recorded. For example, in Lyon (and this is the second largest city in France), about 50 mm fell within 6 hours. rainfall - and this is almost a monthly norm! Also in the central departments of France, there were long periods of strong winds, the speed of which reached 30 m/s.

France: Incredible footage from Brignoles in Vars, where a hailstorm raged 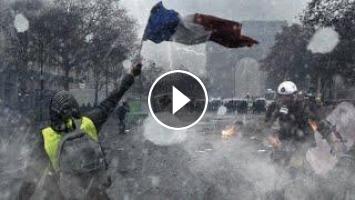